This site uses cookies to store information on your computer. Some are essential to make our site work; others help us improve the user experience. By using the site, you consent to the placement of these cookies. Read our privacy policy to learn more.

The study also finds that all the acquirers (regardless of the industry size and implementation strategy to be used) follow the similar activities outlined in the first two stages of MAS integration framework i.e. preintegration and integration planning. However, at the implementation phase, the activities to be performed are contingent upon the implementation option adopted. Companies adopting immediate absorption tend to undertake minimal changes while companies adopting gradual integration tend to perform a number of activities ranging from co-ordination, standardisation of documents and consolidation. In addition, this study finds that large acquirers are more likely to immediately absorb the management accounting system of relatively smaller acquired system. This is not surprising given that integrating a relatively small firm tends to be easier. However, where the acquired system is unrelated, the acquirer is more likely to retain the MAS and allow it to operate independently. 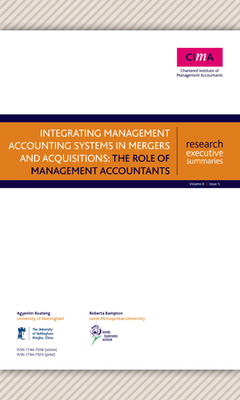 This is a refreshingly practical research. During my career I've been through a number of merger integration and I cannot agree more with the argument about the importance of pre-merger preparations and the human factor. These can make or break the merger. My best experience has been during the time when Chase Manhattan merged with JP Morgan. On the day when the merger was publicly announced, the new organisation structure was circulated down to team level. Hence, every person in the organisation knew immediately his or her future role. There was no uncertainty whatsoever. The merger ended up being a great success. At the level of multinationals post merger integration is a core competence. Withing the J.P. Morgan Chase group these skills were originated from the old Manhattan Hanover Bank and has been a instrumental to creating the largest American financial institution.

Getting started with post-merger integration - FM